February is designated as Black History Month. It is an opportunity to recognize and celebrate the many achievements of African Americans throughout U.S. history.

On Display in Cuesta's SLO Library

The collection is curated by Professor Eric Atkinson of the English Division. The displayed pieces are the personal artifacts of the Atkinson family and are meant to show not only where African American history touches and impacts the larger American historical narrative, but also how history is personal and not just dates, names, and locations to memorize for a test. In other words, because there is a personal connection with history, these pieces are examples of moments, snapshots of moments in time, that allow us to understand the legacy they bring with them that still affect American culture and society today. 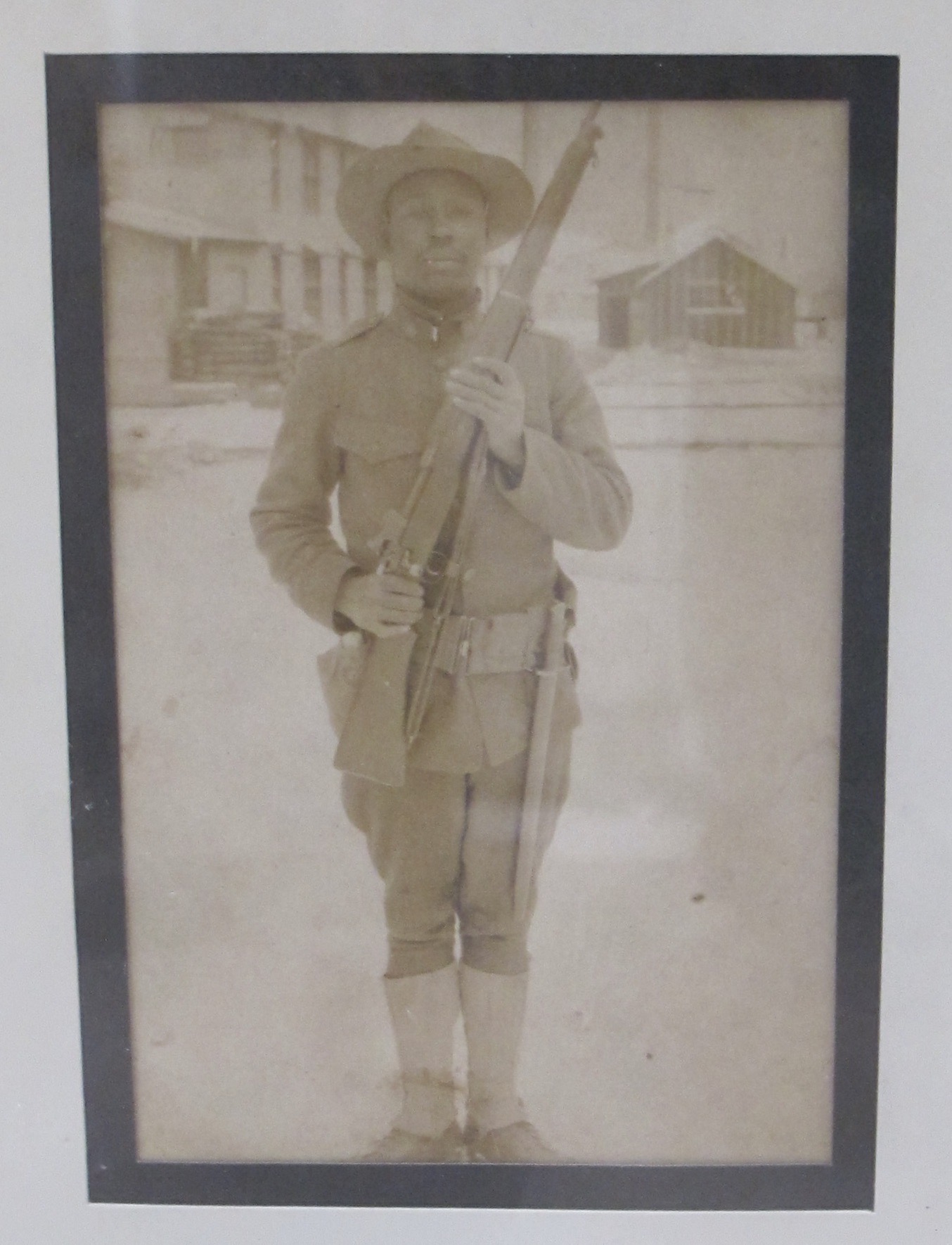 Ancestor to Cuesta’s own Professor Eric Atkinson, instructor in the English Division, Clinton Grigsby, August 25, 1893 – January 20, 1976, served in World War 1 in Company B, 336th Labor Battalion. Although posed here in this postcard as a regular soldier, it was policy at the time that African Americans weren’t intellectually capable of following complex commands or operating machinery for a war theater. Most ended up being the servants and laborers they’d been in civilian life. Contrary to the widely held idea that African Americans were incapable of being soldiers, many have been and continue to be very patriotic. Throughout America’s history, from the Revolutionary War through current military actions in the Middle East, African Americans have actively participated in defending the ideals of an America that routinely dismissed and disenfranchised them. Clinton Grigsby himself signed up for the draft in World War II. 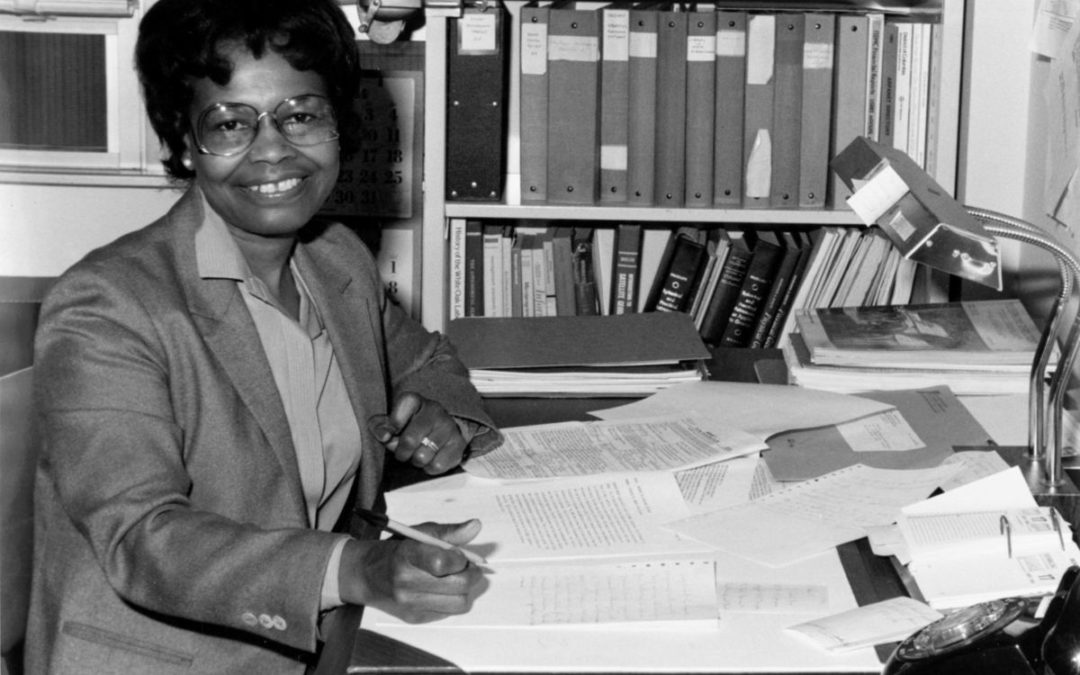 Working as a mathematician for a U.S. Naval base in Virginia, Dr. Gladys West was instrumental in creating the technology we all now enjoy, GPS. This hidden figure of GPS is a daughter of field laborers, sharecroppers, a system that effectively continued the disenfranchisement of African Americans through economic policies instead of enslavement through law. The lack of knowledge of West’s story and how her work has helped to shape America is a testament to the willful and active movement of African American history being seen as something separate from American history. 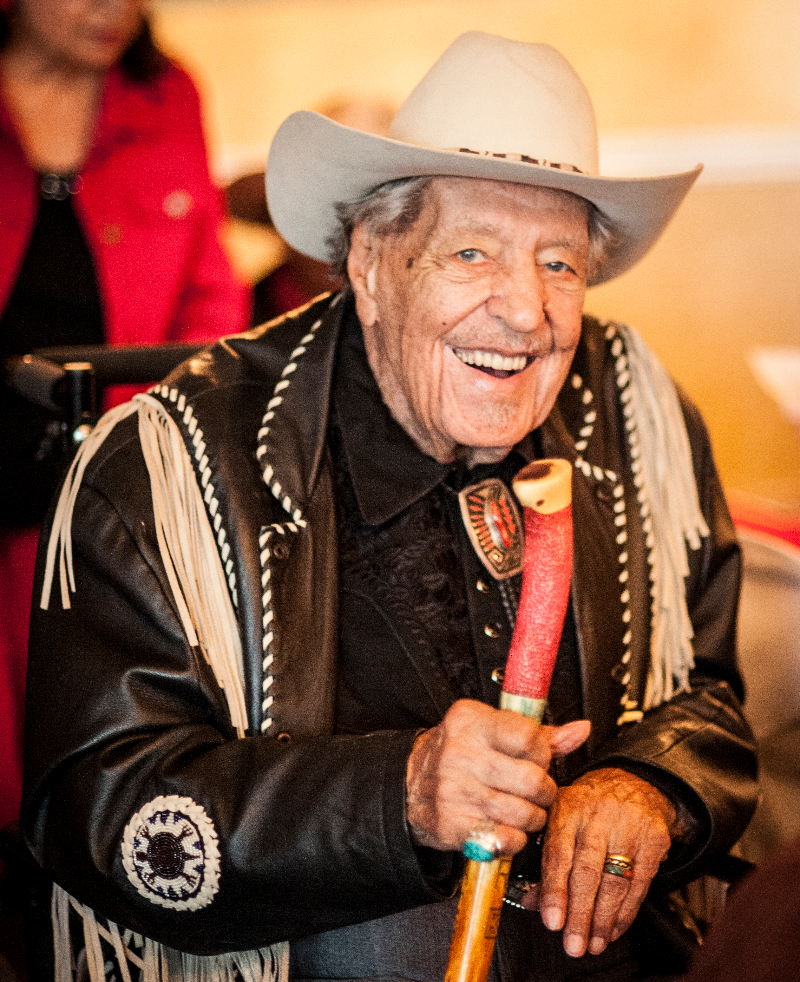 This is a picture of Herb Jeffries, the Black singing cowboy. During the early days of sound in film, singing cowboys such as Gene Autry, Tex Ritter, and Roy Rogers were all the rage. Herb Jeffries, featured here at his 100th birthday party, was largely considered the “last of the singing cowboys.” He was important to African Americans as his presence filled a hole representing the community. His movies, The Bronze Buckaroo, Harlem on the Prairie, Harlem Rides the Ranges, and Two-Gun Man from Harlem, featured all-Black casts that broke down racially closed doors in Hollywood. Photo credit: Donald Atkinson, father of Professor Eric Atkinson. 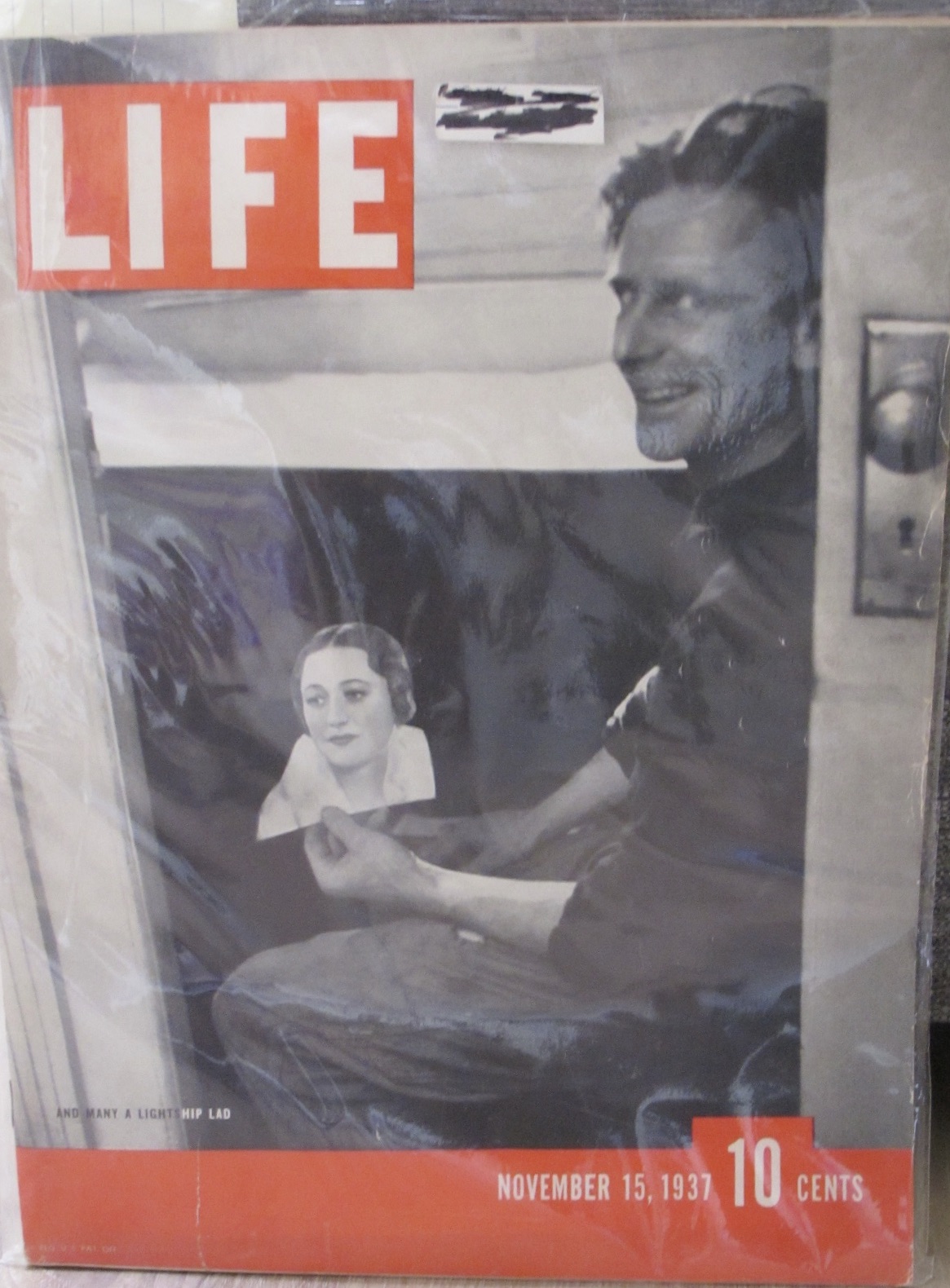 This 1937 LIFE magazine gives an overview of the Murray Dude Ranch of Apple Valley, California. In the early days of Hollywood, celebrities and music stars like Clark Gable, Betty Grable, and Myrna Loy flocked to places like Apple Valley Inn as it was a haven in which celebrities were allowed to decompress and vacation without being mobbed for photographs and autographs. But since this was in the midst of Jim Crow’s declaration of separate but equal, Black celebrities weren’t allowed to stay, eat, or publicly socialize with their white counterparts, hence the Murray Dude Ranch. Not only was it a working ranch, it served as the setting for a number of all-Black cast Western films, including movies by Herb Jeffries, the Black signing cowboy. Notice Joe Louis, the Brown Bomber himself and heavyweight champion of the world, the man that saved America’s pride from the “evil” German Max Schmeling just the year before, had to stay here as he wasn’t American enough to stay with the people he saved. 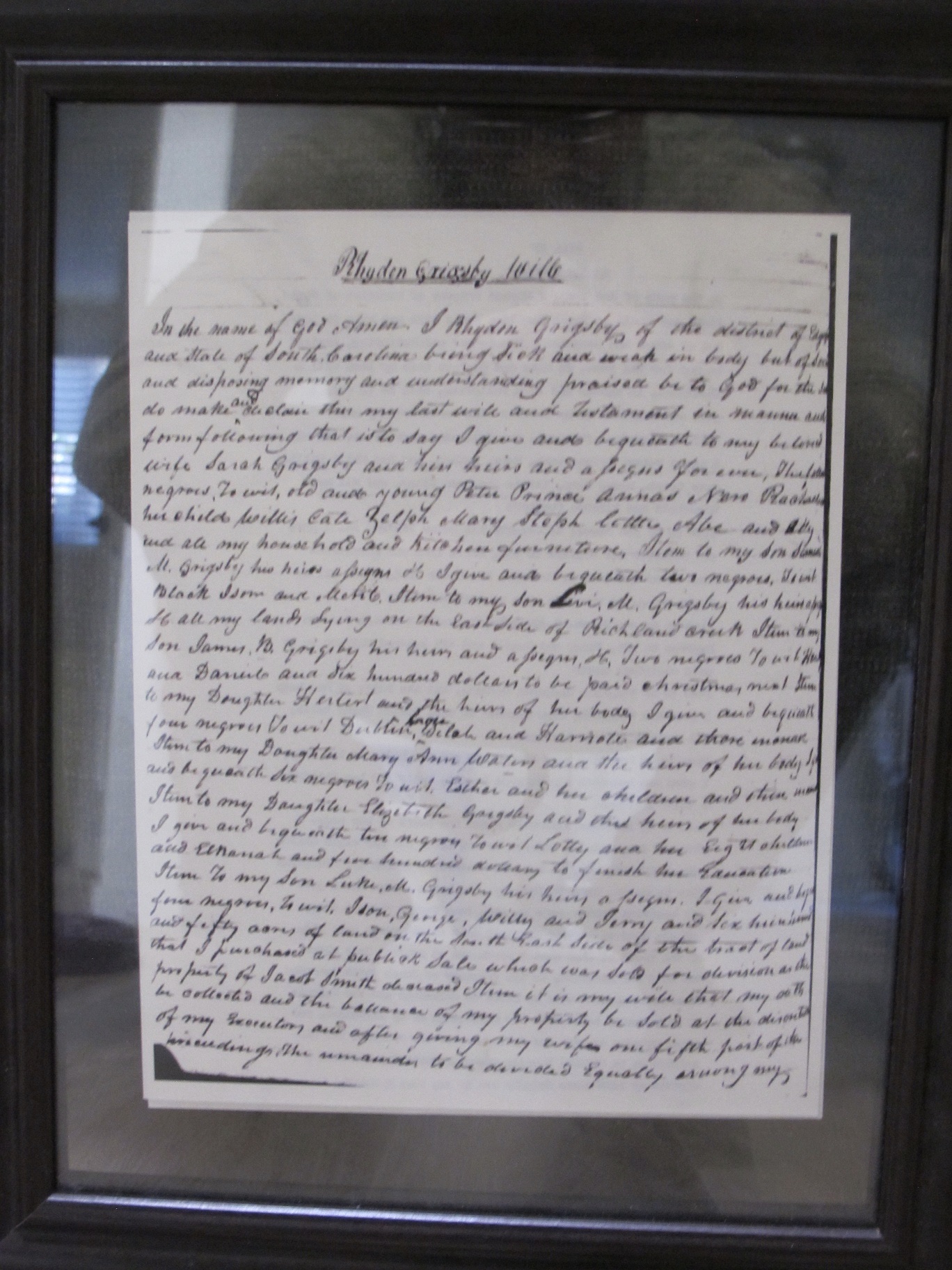 This scanned copy details the 1826 will of Rhyden Grigsby (1784-1825), a white, slave owning ancestor of Clinton Grigsby and Professor Eric Atkinson. It reads in part:

"In the name of god amen, I Rhydon Grigsby of the district of Edgefield and state of south Carolina....  My last will and testiment....  i give and bequeath to my beloved wife Sarah Grigsby and her heirs ... the following negros to wit olde and young peter, prince, annas, nero, rachale and her child willi, zelph, Mary, Step, little abe and ally.”

Later on in the Freeman papers, Mary lists Able as her son.  And when Mary dies, she is living with Abe.She is over 100 years old and says on the census that her parents were Africans.

It is interesting to note that the “property” listed here meant that his family is taken care of after his death, demonstrating that he is a doting and loving father and husband by selling his offspring. Notice how the enslaved were treated here: not quite property but not quite a family. Also, notice how in the attitudes of the time and place, these people were a means for Sarah Grigsby to continue in the life that she was accustomed. 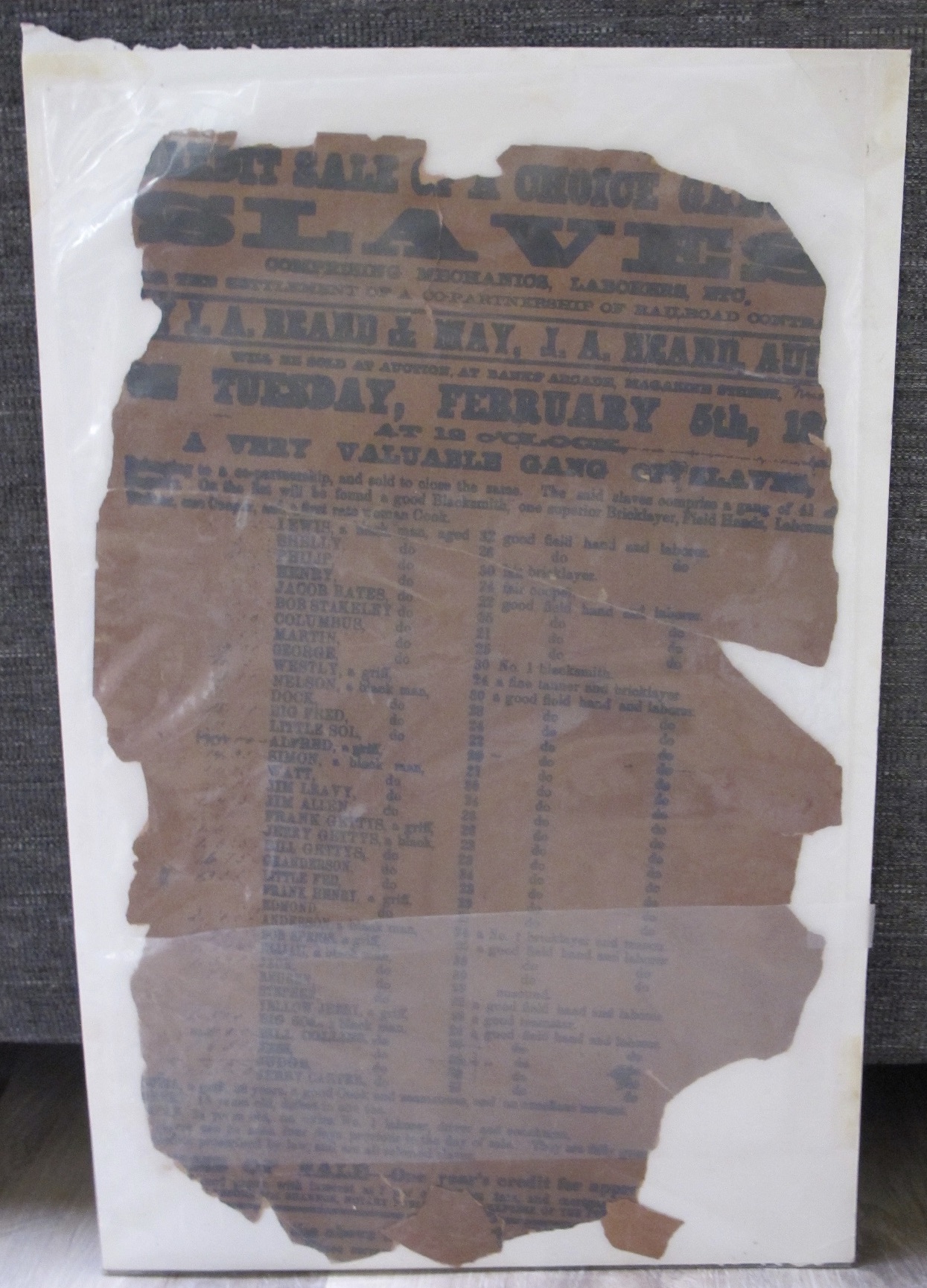 This poster, advertising a slave auction, is from 1856. Notice how these people were listed as commodities, how the names are more descriptive than proper names, and the terms of sale at the bottom all point to how these people were seen as a means to make money. Like contemporary posters detailing shoe sales and fantasy football players, it is important to note how the legacy of the slave system in the United States is still the primary influencer of America’s fundamental beliefs about race and privilege. 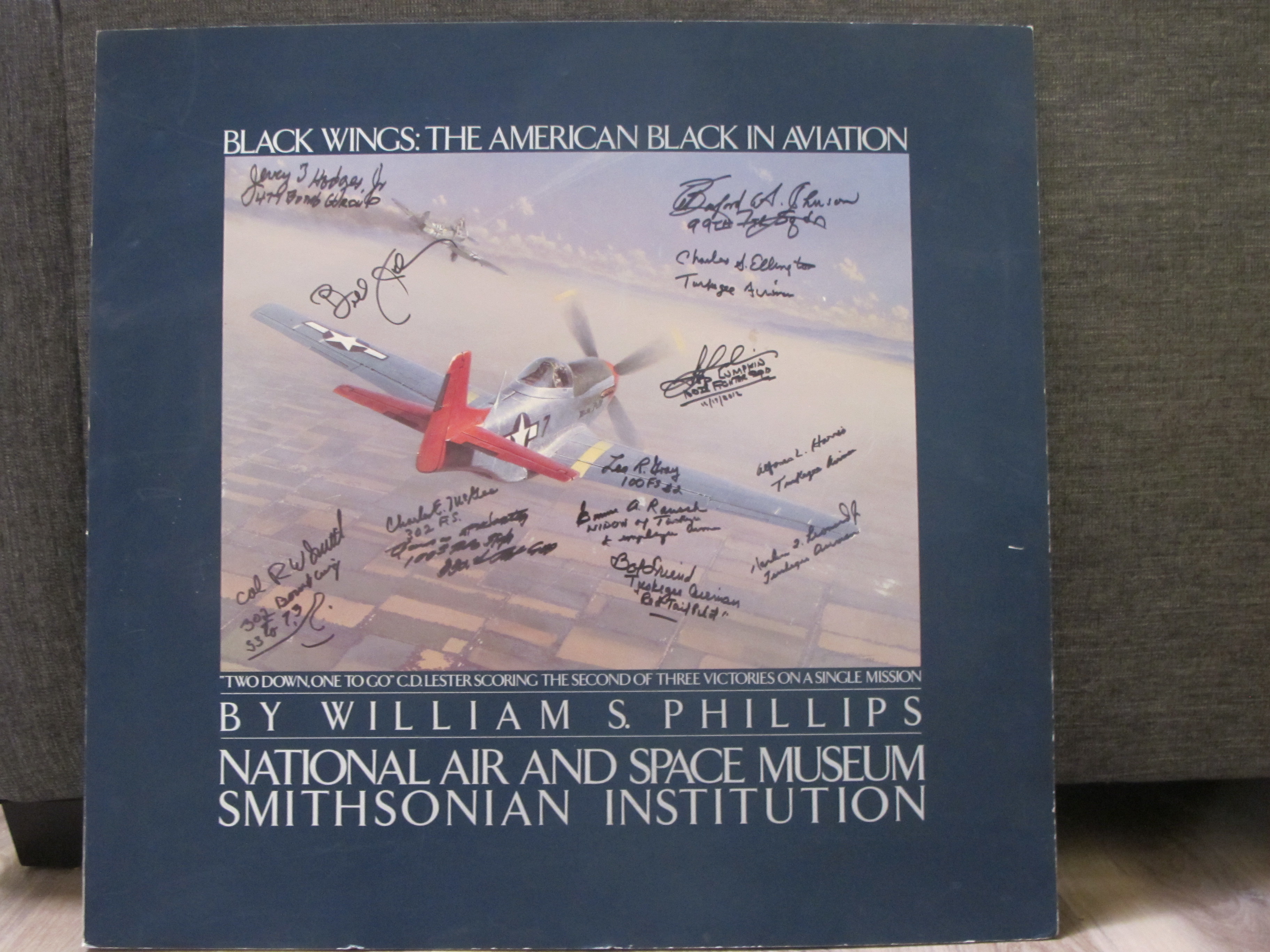 “Two Down, One to Go” C.D. Lester Scoring the Second of Three Victories on a Mission

Depicting C.D. Lester’s day against multiple German foes, this print actually hung in the National Air and Space Museum of the Smithsonian. Signed by no less than twelve Tuskegee Airmen, one widow/nurse, and the famed Staff Sergeant Buford Johnson, the mechanic of the plane that won the first Top Gun trophy of the Air Force in 1949, it celebrates the accomplishments of the Red Tails. It is important to note that the Tuskegee Airmen were not generally well regarded at the time. Eventually, they became known for their prowess in protecting the bombers during raids in Europe, which caused a popular rewriting of history. The popular history usually glosses over the several times the program was almost canceled, the derelict aircraft they were given to fly, and inadequate flight instruction. The program was set up to fail as a way to demonstrate how “negroes weren’t capable.” But their success is testament to their patriotism and character that broke down racial barriers of the Armed Forces. 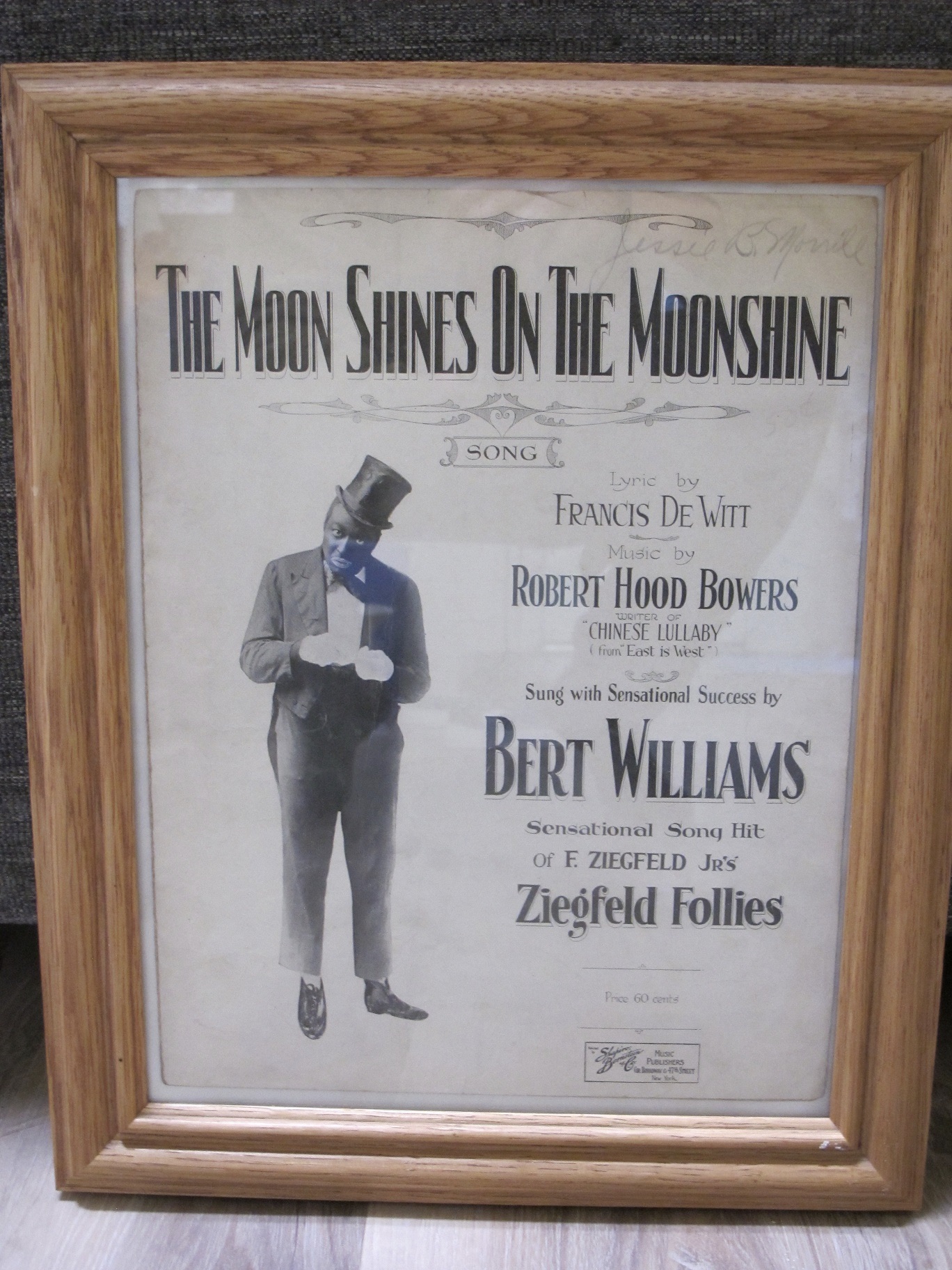 The Moon Shines on the Moonshine

This sheet music, featured in Ziegfeld Follies, dates from 1920 and features one of the most famous celebrities of the time, silent film star, vaudevillian, comedian, and minstrel star Bert Williams. Although Williams was African American, blackface was so prominent that even he could not perform without it. In this sense, African Americans were subject to making derogatory caricatures of themselves as they performed. But it is important to note that this was the only way to make a living in the entertainment business. Despite this, Williams' work was known to evoke a sense of dignity and humanity that transcended the social constraints he had to endure. 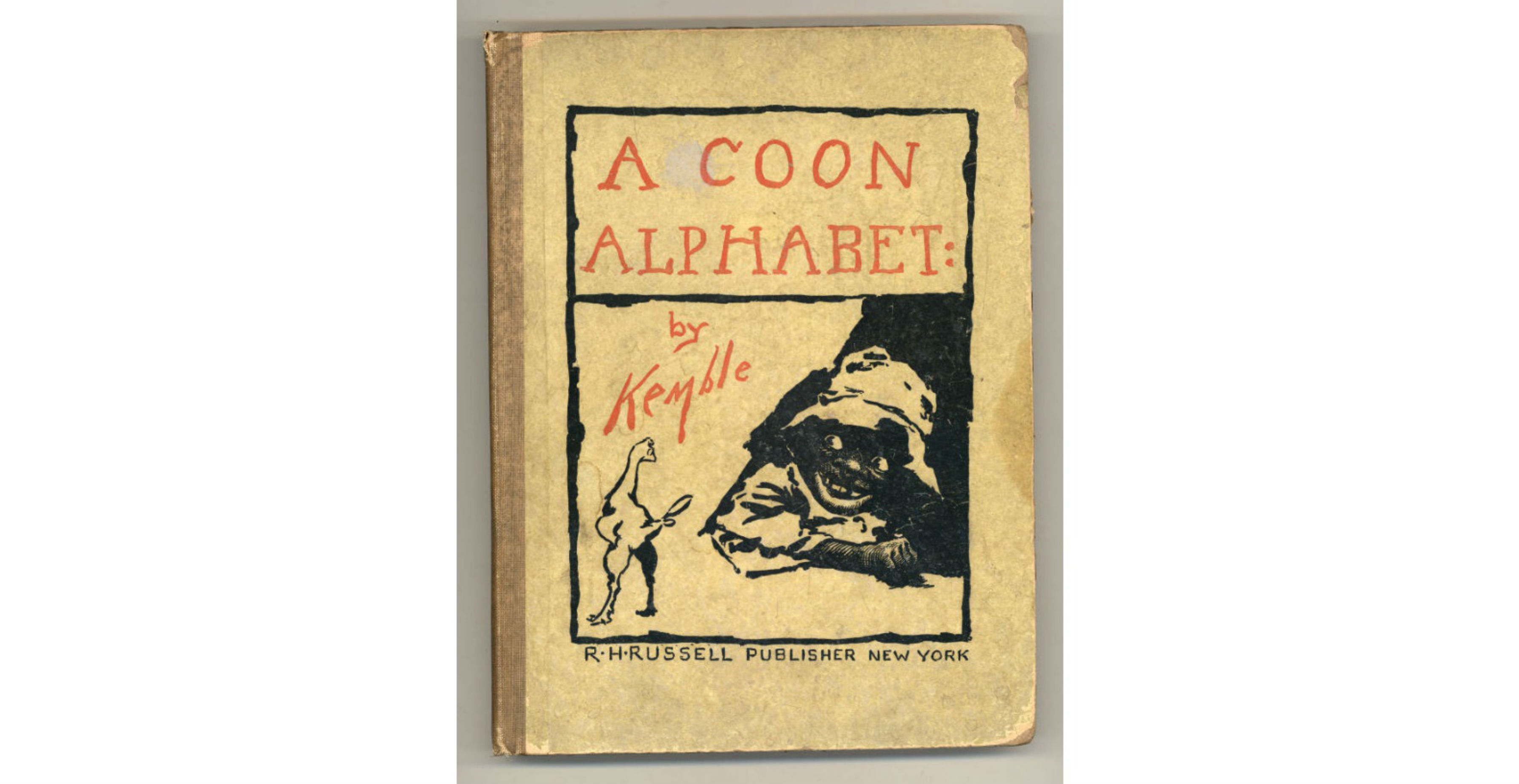 Written and illustrated by California native artist E.W. Kemble, this 1898 book was meant as a cute, humorous way to teach children the alphabet. In his time Kemble was a highly sought after and successful artist as his comic images were even praised by Mark Twain who called him a “genius of an illustrator.” What is interesting is how much this light-hearted, “comedic” take on race reveals about America’s viewpoint of African Americans. It is important to note that not only is this a replica—a commodity of America’s forgotten and painful past made only because of its potential monetary value—but that this was an instrument to teach children how to view an entire group of people. 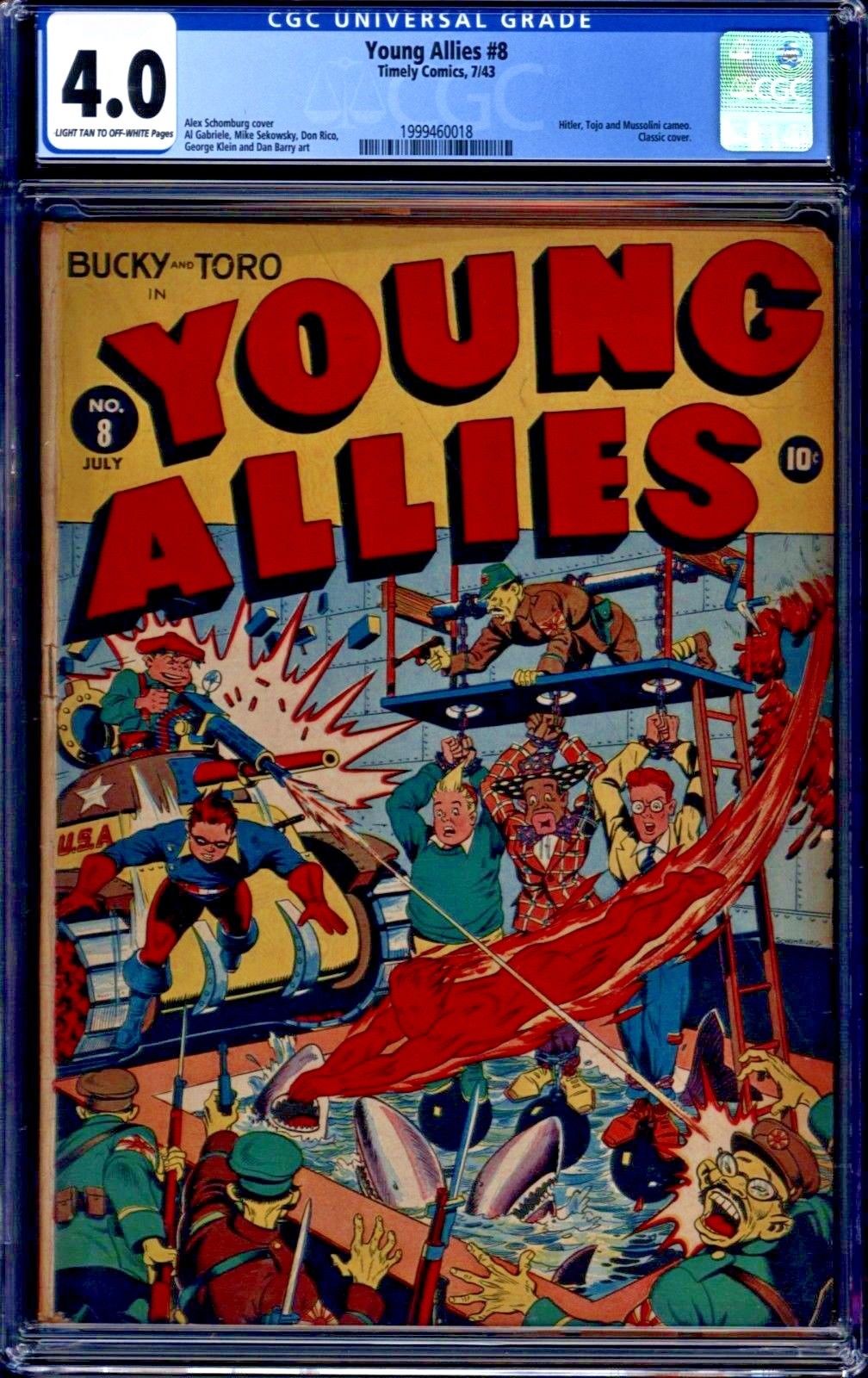 An earlier example of Marvel Comics, the book, created by Timely Comics, and written by Stan Lee, was issued in July 1943 and features the sidekicks for Captain America and The Human Torch, Bucky and Toro. Running until its cancellation in 1946, these comics were meant to be boy adventure stories, and were groundbreaking in that they were considered diverse because the “dark” skinned boy in the tank is Italian, the red-haired boy with the glasses, Jeff Vandergill, was the brains (as glasses always signal intelligence), and the mismatched, polka-dot and stripes, zoot suit wearing African American is the aptly-named Whitewash Jones. As all the characters of the Young Allies group function in order to help solve cases and defeat the bad guys, it is only Whitewash Jones that is the sole provider for comedy, but through racial befuddlement. With that, notice how the Japanese soldiers are depicted: with facial features barely recognizable as human, it is no doubt that this comic, meant for young boys, was a propaganda piece for the war effort, yet would become the template for later characters such as Luke Cage, Black Lightning, and Tyroc. 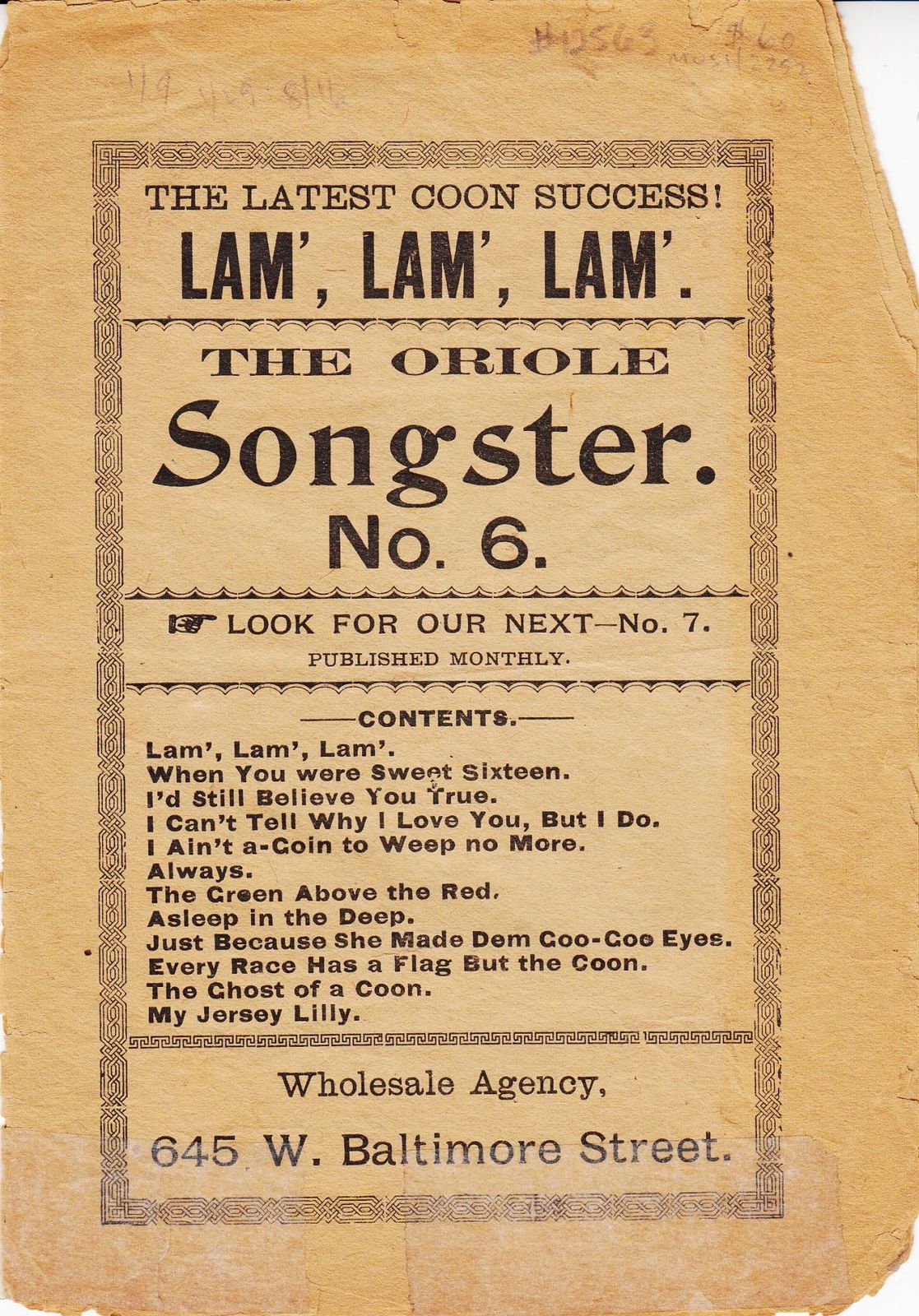 From 1900, this lyric sheet gives the lines for a number of songs including the famous “Every Race has a Flag but the Coon.” A huge hit, this racially comedic song illustrates the popular ideas about African Americans at the time. In fact, the song was so popular that the Pan-African movement, spearheaded by Marcus Garvey, created the now-famous red, black, and green flag in response to the sentiment of the song. The Pan-African flag became associated with the pro-Black movements of the 1960s and had a resurgence in the 1990s, and is best-known today as the colors most often worn and associated with Reggae and Rastafarianism. 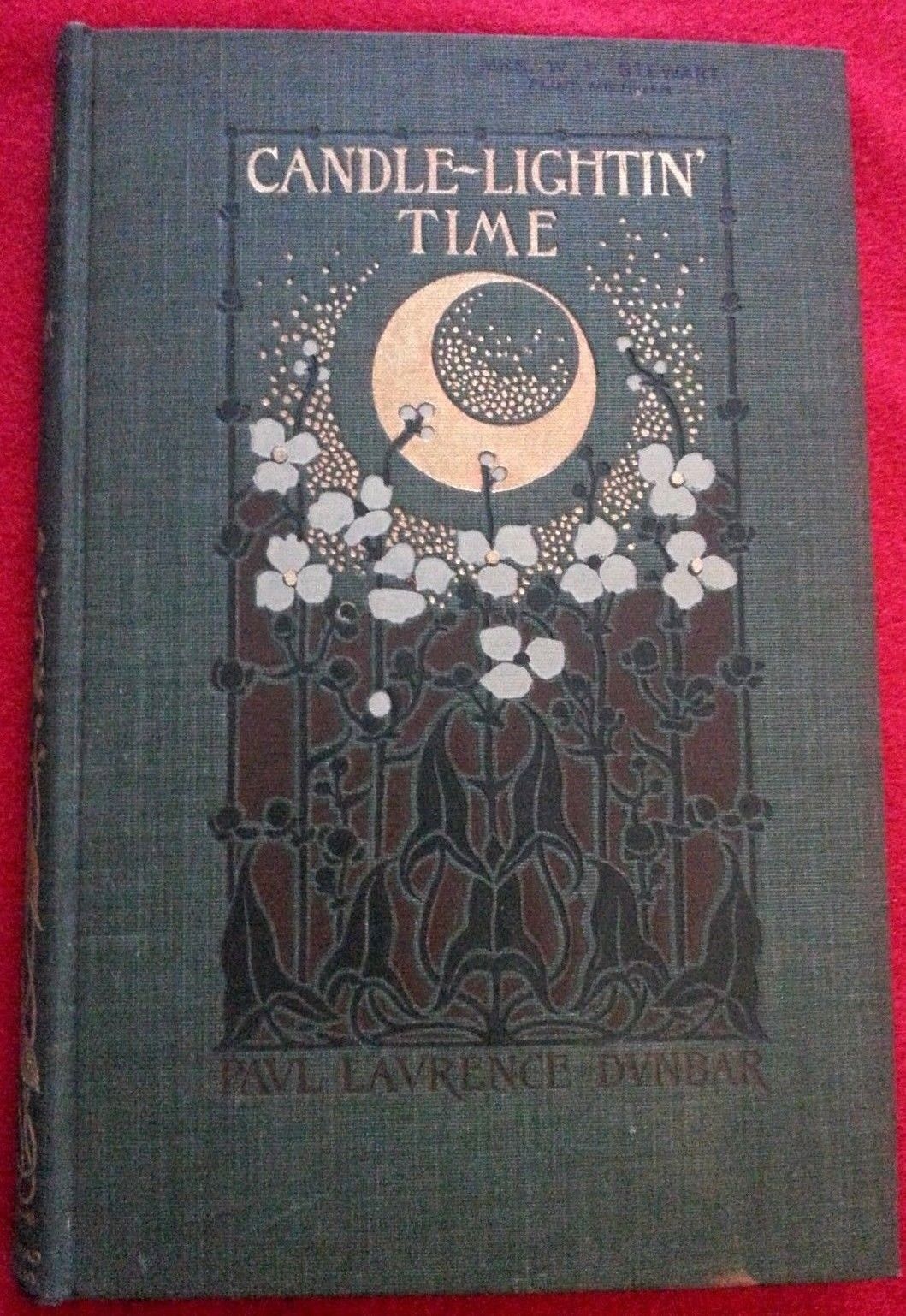 Written by Paul Lawrence Dunbar, this book of poetry was published in 1901. Dunbar was the preeminent poet of his time as his style purposely flaunted literary conventions, giving the poems a sense of layered fun; on the surface they read as silly and sometimes nonsensical poems that maintained a particular meter and rhyme but underneath there is a current of social and political criticism. Largely considered the father of rap and hip-hop, Dunbar’s rhymes evoke a sense of the African American community that contemporary artists like J. Cole and Kendrick Lamar carry on. Like Bert Williams, since Dunbar’s work was public, there was only so much he was allowed to say without alienating the dominant audience.

The Cuesta College Library carries a variety of print books written by or about African Americans. Here is a preview of some of the books available at the library.

The library also provides access to some reference books in eBook format.

Want to learn more about the many contributions of African Americans?
Check out some of these
recommended links !

Check out these featured videos that highlight the roles of African Americans in some of the lesser-known events of American History.